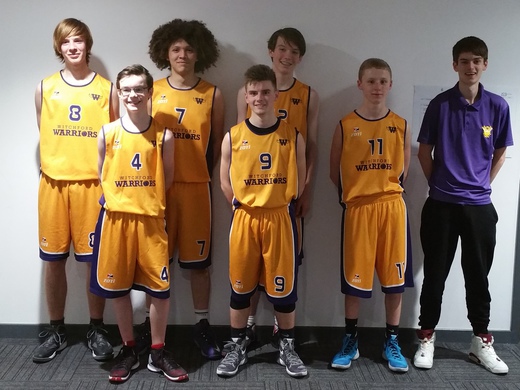 On Friday 26th February 2016 East Cambs Warriors Basketball Club Under 16 team completed their first ever season in the Peterborough Basketball League, winning the Division 3 title with an unbeaten record. Only six players were available for the game, but that did not stop them going onto win the league title.

Fixtures began in the league in November 2015, and although only 3 teams were involved in the competition East Cambs Warriors, Huntingdon Hawks and Nene Valley Venom, the games came thick and fast, being played at Stanground Community College, Peterborough in a central venue format.All games were played in a competitive and friendly spirit, but in the end East Cambs Warriors proved to be the better team, remaining unbeaten and winning all games with double figure victories.

Head Coach Rob Knapper said “The club has only been in existence as East Cambs Warriors since 2014, before that we were Witchford Warriors and when we merged with Ely Flames we became East Cambs Warriors.For us to achieve what we have done in two years is brilliant not only for the club, but for the young players on the team that represent schools and the community of East Cambs and Fenland.

I know how hard they have worked over the years and even though we have suffered some heavy losses in other leagues, they boys have always given everything that the coaches and I have asked.They have come back every week and given their all in training and matches.

I said to the players as they approached their final games in the league, knowing that we had already won, that they had to show the same respect for the opposition they had all season.They had to make sure that they did not get complacent and think that they were going to win the games by just turning up, but no one would ever take away what they had achieved as a team. Some of the team were missing in the victory, but all played their part.

As a club this is tremendous for us.It is our first ever title and silverware ever and that is very special to all of us, but especially to the boys that have played in the team, they will always have the honour of winning the clubs first ever title!I hope that with this win, we can go onto win even more.We are already one of the biggest junior clubs in the county and we hope to get bigger”