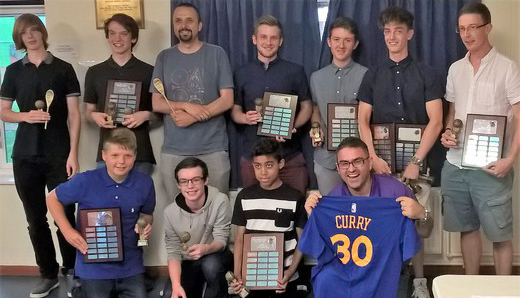 The Warriors held their annual AGM and awards presentation evening for season 2015-2016 on Wednesday 20th July at the Sutton Pavillions. There were lots of winners and an enjoyable evening was had by all, closing out with a raffle in which the star prize was a Spalding T-1000 basketball donated to the club by Bigfoot Basketball. this was won by Tim Evans, but donated back to the club for our use on match days.

It was a well attended annual AGM and trophy presentation which took place on Wednesday 20th July 2016 at the Pavillions in Sutton. Many of the Warriors players turned up and this year, there was a large group of parents, friends and families that also made the evening a very special event.

As per normal, the AGM was held first and a new committee was elected for the new season ahead. The committee will oversee all aspects of the club and hope to have regular meetings to discuss all things Warriors and Amazons. The new committee for the 2016-2017 season are:

The coaching roles were also decided with Rob Knapper remaining Head Coach of the both the Warriors and Amazons. Rob would also be the coach for the Seniors and under 18 team, with Hayden Brown and Pedro Diaz having responsibility for the Under 16 and under 14 teams.

The big event of the evening was the awards presentation for the 2015-2016 season. Some of the winners of the trophies did not attend the evening, but for those that attended and collected their trophies, a warm round of applause and cheering greeted them as they collected their winning trophies. First up on the night to pick up their trophies were members of the victorius Under 16 team, who won the clubs first ever trophy this season by winning the Peterborough Division 3 title with an unbeaten season. A full list of the other winners can be foudn below. The individual pages for each of the winners will also be updated, so please check out the profiles: