End of another long season 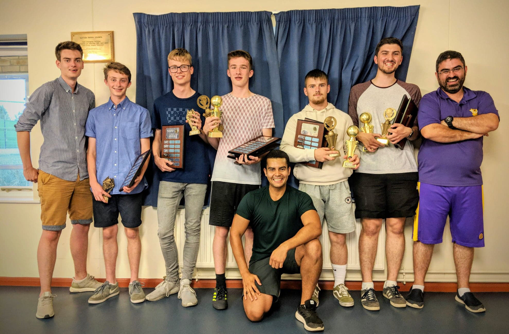 On Wednesday 18th July, East Cambs Basketball Club celebrated the end of a long and enjoyable season with their trophy presentation evening.

Before the trophies were given out, Head Coach and Chairman Rob Knapper addressed the players, friends and family members that had turned up with the details of the AGM. The club were also able to announce the re-branding of the club with a brand-new website and logos for both the men’s team, East Cambs Warriors and the women’s team, East Cambs Amazons. The new website will hopefully launch in August.

Rob Knapper said “This is a new beginning for the club and all involved. One of our senior team players, Neil Watson, is a graphic and web designer. He approached me asking if it would be ok to design new logos and a brand-new website for the club. I jumped at that chance. The new logos are amazing and represent a new direction for the club. We will be known now as East Cambs Basketball as we want to promote and increase our community links and promoting this fantastic game to all in the area”.

One of the new links the club has established, is the new training base for the senior and under 18 men’s teams who are now based at the brand-new Sports Hall at The Hive Leisure Centre on the new leisure park. Rob said “The senior team and the under 18s are growing. We no longer could train in comfort at Witchford Village College, so looked for a new venue. I had been in contact with The Hive for some time and finally got the green light to move the team at the beginning of July. It has been a good move for us and will hopefully increase our exposure and attract new players. We hope to be working closely with the team at The Hive which will be of benefit to all of us. With this move, our women’s team, the Amazons, have now moved to Witchford Village College. They have a bigger venue to train in and at a later time to attract new players”.

As for the trophy presentation, not of all of the winners were present on the night, but a fun and enjoyable evening was had by all. Awards were given to the Under 14, Under 16, Under 18 and Senior teams of the Warriors.

Under 16:
Most Valuable Player and Players player – Kieran Edgley
Most Improved – Aleck Forrest

Under 18:
Most Valuable Player and Players player – Aurimas Sileris
Most Improved – Alex Dower

Rob Knapper said “It has been an up and down season, but right from our youngest to our senior players, everyone has given the coaches and myself 100%. The awards are richly deserved and those that have won the Players player should be proud as it was voted for my their teammates”.

Anyone interested in playing for either the Warriors or the Amazons should get in touch with Rob Knapper. The Warriors run junior teams at Under 12/14/16/18 (ages 8-17) and a senior men’s team (ages 18+). The Amazons women’s team have one team at the moment but players aged 12 and above are invited to come along. Please email the club at contact@eastcambsbasketball.co.uk for further details or search for us on social media.