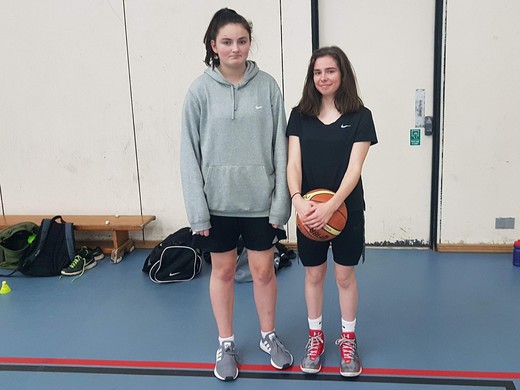 East Cambridgeshires only women’s basketball team, the East Cambs Amazons, have had its two youngest members selected to be part of the Norfolk County under 17s development squad.

Sarah Pollard and Megan Kolici who both train with the East Cambs Amazons Basketball club, attended the Norfolk County trials which were held at Dereham Leisure Centre on Saturday 30th September. Both were selected by coach Jenny Clarke to participate in the performance pathway.

Sarah attends Witchford Village College and Megan attends Soham Village College.  Sarah has been training with the East Cambs Warriors Under 16 (boys) team and is now a member of the Amazons which were started in June 2016 with the help of Living Sport.  The aim was to get girls and women playing sport and keeping them involved.  Megan, unlike Sarah is new to the game and attended an Amazons training session where she was made welcome and has been with the team ever since.

Sarah and Megan will now attend training sessions with the Norfolk County Squad.

East Cambs Basketball Head Coach Rob Knapper said “Sarah has been involved with the club for a couple of years now, having attended the Warriors training sessions.  Sarah is a talented player and always gives her coaches 100% when she attends training.  Megan has been our diamond in the rough.  She attended one of the Amazons training sessions, and at first found it difficult, but she stuck with it and the short time that she has been with us, we have seen her skill level increase, for them both to have been selected for the pathway they should be very proud.  Coach Nella has only recently qualified and her hard work with the team is paying off.

Having discussed with Coach Hayden Brown (Warriors junior team coach) and Coach Nella David (Amazons coach) that I wanted both of them to attend the trials, I spoke with both Megan and Sarah and suggested that they attend the trials to see at first how they got on.  We are over the moon that both have been selected onto the programme and their basketball knowledge and skill level will only increase as they attend the training sessions.  We do not have women’s/girls county set up in Cambridgeshire which is a shame and apart from us, there are only 3 women’s teams in total in the whole county.  Megan and Sarah will also be playing for the Warriors Under 16 team in the Peterborough League over the coming season, so will be getting valuable game experience too”.